Mergers and Acquisitions (M&A’s) are an increasingly popular route for foreign investors looking to begin operations in Vietnam – and due diligence is a key component of the M&A process.

While there are several aspects to consider in a due diligence – such as the company’s reputational profile, strategic position in the market, and assets – we focus on legal and financial due diligence because they represent the starting point for most investors.

Legal and financial due diligence may take several months, depending on the size of the company being acquired, as well as the location where it is based. This work is typically conducted by a third-party professional services firm.

Foreign investors should seek to select a firm that has an office in-country with staff fluent in both Vietnamese and the language spoken at the investors’ headquarters. This profile will help ensure your service provider can work more efficiently during both on-site visits and communication with overseas managers.

Legal due diligence of a target company

During the legal due diligence process, service providers may ask to review the target company’s documents, certificates, qualifications, and licenses. These may include:

The percentage of foreign ownership to the target company based on applicable local laws, World Trade Organization (WTO) and other free trade agreements (FTAs) where Vietnam is a member will also need to be determined before the acquisition.

Commercial contracts, loan agreements, MoUs, and non-disclosure agreements signed by the owners of the target company.

Any ongoing litigation of the target company may affect its value. A thorough review of the litigation status is recommended.

Financial due diligence of a target company

Financial due diligence allows the investor to audit the target company and analyze the company’s earnings, its working capital needs, as well as sales and operating expenses.

Financial diligence can be broken down in two parts: assets and liabilities. 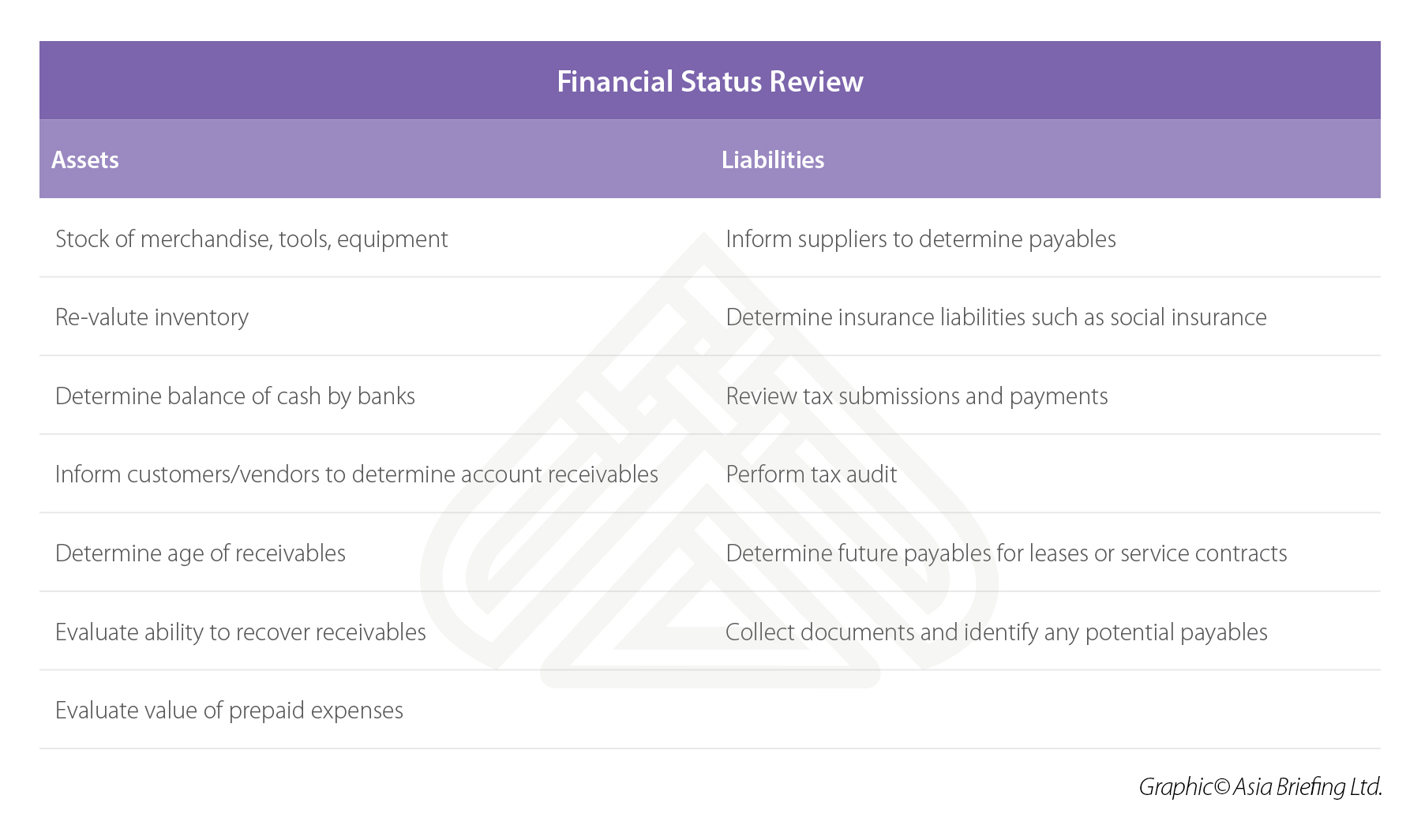 Review all of the target company’s documents related to revenue, expenditure and other accounts. This should be done to ensure the documents are factual and to identify any discrepancies.

Other items that may need to be reviewed are capital contribution, cash on hand, cash flows and any other key financial indicators.

Once all the documents have been reviewed by the service provider, it submits a report, with details outlining to see if the target company is in compliance with all the rules and regulations in Vietnam.

At this stage, the third party can advise on any issues that need to be resolved between the acquiring and target company. Typically, the entire process of legal and financial due diligence in Vietnam can up to three months or more.

This article is produced by Vietnam Briefing, a premium source of information for investors looking to set up and conduct business in Vietnam. The site is a publishing arm of Dezan Shira & Associates, a leading foreign investment consultancy in Asiawith over 27 years of experience assisting businesses with market entry, site selection, legal, tax, accounting, HR and payroll services throughout the region. 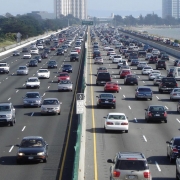 Vietnam’s automobile industry has grown significantly in recent years. The average growth rate of domestically assembled vehicles was approximately 10 percent per year in the 2015-2018 period. With major manufacturers such as Toyota, Honda, Ford, Nissan, and Kia in the Vietnamese market, the number of spare parts suppliers have also invested in the industry giving the sector a much-needed boost.

The motorbike is ubiquitous to Vietnam, but with the country’s fast-growing middle class, car ownership is steadily rising. This growth, however, is likely to be stunted in the short term due to the COVID-19 pandemic but expected to resume in the long run as Vietnam reopens its economy.

The automotive industry is a major contributor to the GDP of many countries in the world: 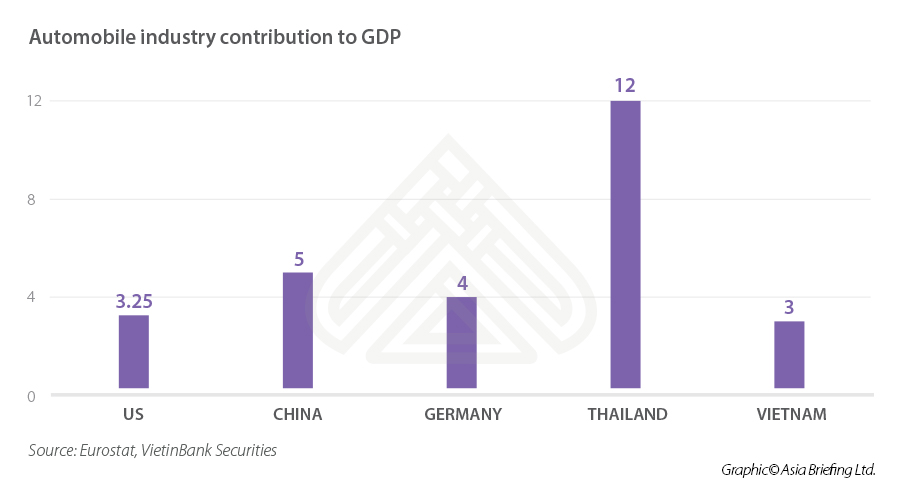 As displayed above, with such a high share in Vietnam’s GDP, the automotive industry has always received special attention from the government. There are currently many large automotive assembly and production projects in Vietnam with the aim of not only meeting domestic demand but also tapping into the regional market.

Local conglomerate Vingroup officially inaugurated its Vinfast factory on June 14, 2019, making it the first domestic automobile factory in Vietnam. The factory is not only state-of-the-art but also in line with Industry 4.0 standards.

However, the Vietnamese automotive industry faces stiff competition. Part of the reason for this is the zero-tariff policy between ASEAN countries that Vietnam is part of. Thus imports are cheaper than domestically produced vehicles.

Although Vietnam is one of the four largest automobile manufacturers in Southeast Asia, it has one of the lowest average localization rate in this region (only around 10-15 percent, and is still far behind Thailand, Indonesia and Malaysia).

About 80-90 percent of the main raw materials used to manufacture components are still imported. As a result, companies are required to import approximately US$2 billion to US$3.5 billion in components and parts for vehicle manufacturing, assembly, and repair each year.

For this reason, domestic automobile production costs are 10-20 percent higher than in other countries in Southeast Asia. As a result, the cost of cars produced domestically are at a disadvantage compared to completely build units (CBUs) that are imported.

Vietnam imported more than 109,000 CBUs in the first nine months of 2019 with a turnover of US$2.4 billion as per official statistics. Compared to the same period in 2018, imported cars increased by 267 percent in volume and 257 percent in value.

Cars with less than nine seats led imports – with about 75,848 vehicles valued at US$1.5 billion. This shows the increasing purchasing power and the changing demands of customers. In addition, the vehicles imported from the EU mainly come from Germany. As per the General Department of Vietnam Customs in 2018, 1,197 imported cars from Germany were registered in Vietnam. Germany’s ZF Friedrichshafen inaugurated its first plant producing chassis modules for cars in Haiphong in November 2019.

In light of the recent COVID-19 outbreak, Vietnam has imposed several travel restrictions on those entering the country. As of May 19, Vietnam had confirmed 324 cases of COVID-19, though 263 of the patients had recovered.

Those planning to travel to Vietnam should be aware of the latest restrictions currently in place:

The Vietnamese government officially declared COVID-19 as an epidemic on February 1, with authorities taking swift and strict measures to contain the virus.

These include measures such as the suspension of schools, the cancelation of festivals, and tourist activities nationwide. In addition, bars, clubs, and movie theatres have also been closed in Hanoi and Ho Chi Minh City until March 31.

In addition, several Vietnamese businesses, residential complexes, and restaurants have installed their own preventative measures to keep customers safe.

Due to the epidemic, travelers should monitor restrictions and comply with advisories issued by the local and national authorities.

The Vietnamese Ministry of Health is updating about the epidemic here, while the Tourism Ministry has also listed travel updates here.

In addition, basic precautions one can take to reduce their risk to the coronavirus as advised by the World Health Organization (WHO) are:

As the outbreak of COVID-19 hampers business activity, Vietnam introduced Decree No. 37/2020/ND-CP (Decree 37) on March 30 to update the list of sectors and industries access to investment incentives under Decree 118/2015/ND-CP. The move underlines the government’s efforts to support businesses and particularly small and medium-sized enterprises (SMEs) affected by COVID-19.

The aforementioned businesses will now be eligible for import duty exemptions on fixed assets as well as other exemptions based on location.

SMEs continue to play a major role in Vietnam, accounting for 98 percent of all enterprises, 40 percent of GDP, and 50 percent of employment or 1.2 million jobs. As per the Ministry of Finance, Vietnam has more than 600,000 firms, with nearly 500,000 private and 96 percent being small and micro-enterprises.

However, SMEs continue to face problems such as access to finance, market access, and competition with foreign firms. We highlight three issues faced by SMEs below.

Credit access is a major concern for the Vietnamese SMEs. Banks providing commercial loans prefer to allocate their resources to larger firms rather than SMEs. According to banks, higher default risks, lack of financial transparency, and lack of assets for a mortgage are the major factors for not providing loans to SMEs. SMEs have to increase transparency and introduce newer production technologies, to reduce risks and increase efficiency to increase their chances of acquiring commercial loans.

A study by the International Finance Corporation shows that only 21 percent of Vietnamese SMEs are linked with global supply chains, much lower than 30 percent and 46 percent in Thailand and Malaysia respectively. Integrating further with global supply chains in terms of procurement, operations, and sales will allow firms to manage competition, reduce risks, and reduce production costs, which currently is 20 percent higher than those of neighboring countries, such as Thailand and China.