You are here: Home1 / News – Leaders in Law2 / Immigration Law

The jointly produced report, A Tool for Justice: A Cost Benefit Analysis of Legal Aid, looked at more than 50 cost and benefit studies of legal aid programmes and found that increased access to justice can be a “win-win” for businesses, the economy and society at large.

The report, launched this week at the IBA conference in Seoul, South Korea, argues that failing to provide adequate legal aid does not save money, but simply shifts the financial burden to other areas of government spending such as healthcare, housing, child protection and imprisonment.

For example, the report cites a study in Canada which estimated the costs of unequal access to justice on public spending in other areas (employment insurance, social assistance and healthcare) to be roughly 2.35 times more than the annual direct service expenditures on legal aid.

The latest comments from across Legal Cheek

“Unaddressed legal needs affect individuals, their families, the justice system, the economy and society as a whole,” commented Lucy Scott-Moncrieff, a member of the IBA Access to Justice and Legal Aid Committee. “As a profession we must continue to champion legal aid programmes and ensure that everyone has the opportunity to access justice.”

The report further claims that around 5.1 billion people — roughly two-thirds of the world’s population — lack “meaningful” access to justice, the result of which can lead to people becoming trapped in “vicious cycles of poverty, inequality and marginalisation”.

The report’s release follows the Labour Party’s pledge to provide free legal training for 200 lawyers specialising in areas such as benefits, debt, housing, employment and immigration. 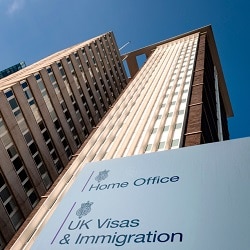 A jailed immigration solicitor who turned to crime only two years after qualifying has been struck off by the Solicitors Disciplinary Tribunal (SDT).

Sheikh Muhammad Usman was jailed for seven years at Croydon Crown Court in April this year for assisting illegal immigration through the “hijacking of identities”.

“Although he was not particularly experienced as a solicitor, he was a mature individual aged 35. Of the four defendants, he was the only qualified solicitor.

“The judge described the offences as particularly serious and striking at the heart of the immigration system and undermining public confidence in that system.”

The SDT went on: “A crime had been committed which was deliberate, calculated and repeated. It was elaborate, sophisticated and involved a high degree of planning.

“It continued over a period of time from 2010 to 2016. As a participant, [Mr Usman] concealed his activities, which only stopped because the criminal activity was discovered. Vulnerable people were exploited.”

Mr Usman, both at his trial and his SDT hearing, which he did not attend as a serving prisoner, maintained his innocence. He has appealed his conviction.

“He asserted that he was a victim of crime and had been deceived, which the judge did not accept, and he had been convicted. The only real mitigation he asserted was that he was innocent.”

Counsel for the Solicitors Regulation Authority said Mr Usman had been involved in a “fairly sophisticated” illegal immigration scheme, the ringleader of which was a Home Office employee, Shamsu Iqbal.

Judge Gower QC told Croydon Crown Court that Mr Iqbal accessed Home Office records of genuine individuals who had, at some point in the past, been in contact with it over their status.

The three other defendants would act as legal representatives of the impostors, corresponding with the Home Office to legitimise their immigration status.

Judge Gower said the motivation was “financial rather than humanitarian” and Mr Iqbal profited “to a very considerable extent”. A “considerable number of people” were helped to remain in the UK in breach of immigration law.

As an example of the impact on innocent individuals as a result of the “hijacking of identities”, the judge gave the example of a man detained at Heathrow and then Harmondsworth for nine days before the true position could be understood.

By virtue of his conviction, Mr Usman was found to have breached a number of SRA principles and showed a lack of integrity.

The allegation that he failed to notify the SRA of the date of his trial or fact of his subsequent conviction was rejected. He was struck off and ordered to pay costs of £2,500.