You are here: Home1 / News – Leaders in Law2 / Competition Law

Leaders in Law, the leading platform in its field, is delighted to welcome Okan Or as our exclusively recommended & endorsed Competition and M&A Law expert in Turkey. Okan’s office is located in Istanbul.

Prior to founding SEOR Law Firm, Okan was a partner in Pekin & Pekin Law Firm. Okan advises clients on a wide range of corporate transactions. He has extensive experience on various forms of merger & acquisition transactions, including formation of joint ventures, asset transfers, privatizations and various types of public private partnerships.

Okan advises a number of multinational corporations, private equities and local entities at all phases of merger & acquisition transactions. Having made 10s of filings before the Turkish Competition Board, Okan is among the leading attorneys of the jurisdiction in the Competition Law area, assisting his clients in investigation processes, implementation of pre-emptive measures and training programs as well as merger control filings.

If you require any assistance in this area, please use the contact details provided in Okan’s profile below or contact us at info@leaders-in-law.com & we will put you in touch.

Leaders in Law, the leading platform in its field, is delighted to welcome Jean-Christophe Grall as our exclusively recommended & endorsed Competition Law expert in France. Jean-Christophe’s office is located in London.

Jean-Christophe Grall is the founding partner and managing partner of Grall & Associés for twenty years now. For more than 30 years, Jean-Christophe Grall has been providing legal assistance to industrial and service undertakings, notably through the drafting of commercial agreements and the setting up of comprehensive exclusive, selective or franchise distribution networks.

The competition division of Grall & Associés has one of the largest teams in the French market. Its experience working on cases enables it to assist each one of its clients by anticipating the reaction of the competition authorities and by developing the best strategy – be it advice or litigation – to respond in the right way to any complex situation that involves the French and European competition rules.

If you require any assistance in this area, please use the contact details provided in Jean-Christophe’s profile below or contact us at info@leaders-in-law.com & we will put you in touch.

Which? has launched a £480 million complaint in the UK against 4G chip maker Qualcomm alleging that it has abused its dominant position in the marketplace by inflating prices for licenses of the patents that it holds. Which? alleges that these prices were then passed on to the consumer in the form of higher handset prices.

A patentee grants a patent license to a third party so that the third party can practice the invention without the risk of being sued. Licenses are often granted in exchange for a fee – or in exchange to license technology from the third party – so called “cross-licensing”. In this case Which? alleges that the terms of the licenses were inflated to Qualcomm’s benefit as a result of its dominant position in the marketplace.

The Federal Trade Commission in the United States brought a similar action in the United states in 2017 – but this was ultimately dismissed. However, in Europe Qualcomm was found to have broken competition law for deals it made with Apple, and for its 3G licensing deals. It received significant fines at the time.

What does this tell us about IP? Regardless of the eventual outcome of this particular case, it shows us that patent rights and competition law can be in contrast to one another. Patent rights grant monopolies – the right to exclude others from a market, whilst competition law attempts to stop dominant companies from abusing that position of dominance. Therefore, once a company is large enough that it has a dominant market share it must consider competition law when utilising its patent portfolio.

For technology companies that have a licensing based business model a successful patent strategy could mean that they become dominant in a burgeoning technology market very quickly. It’s therefore necessary to continually assess the market share you have in a particular marketplace and how that may affect your trading practices. As ever it is always best to seek professional representation if you are concerned about such matters. 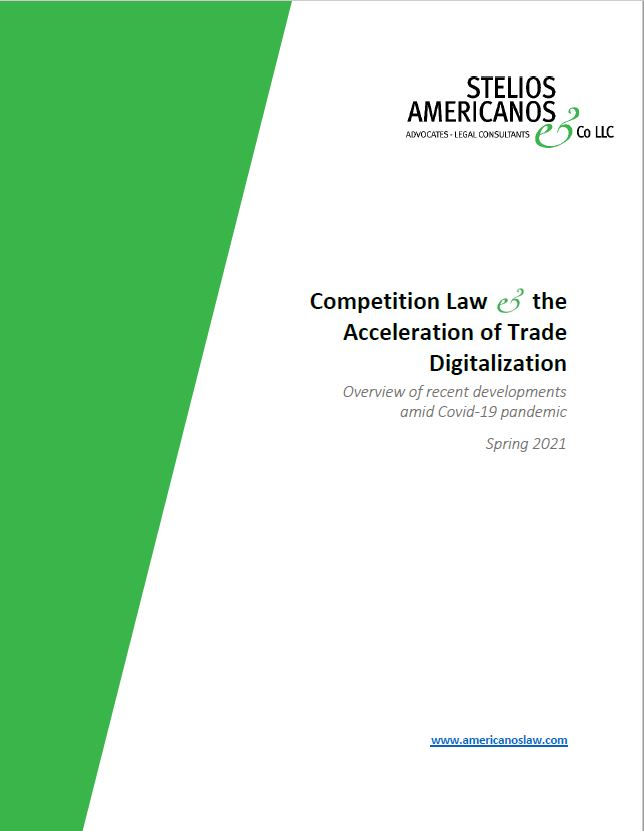 This note seeks to provide an overview of some of the key recent developments in the area of competition law with regards to the challenges brought about by the Covid-19 pandemic (“the pandemic”) and the disruption induced by digitalization and online marketplaces.

More specifically in this report you will find the following topics:

Competition law and policy continue to be crucial in steering the healthy and fair recovery of businesses from Covid-19. The rapid and in some cases instant switch from partial to complete digitalization, delivery apps, and online marketplaces, has brought forward a series of new challenges for the competition authorities. These challenges need to be addressed properly, minimizing the risk of negative market distortions in the EU.

President Cyril Ramaphosa will today sign into law the Competition Amendment Bill, which will strengthen regulations against anti-competitive behaviour in industrial markets.
The bill, which was approved by the National Assembly in October 2018 and endorsed by the National Council of Provinces in December 2018, is a step in the right direction for SMEs, economic inclusion and it opens up the economy to fresh investment and innovation.

It also provides a clear mandate to the competition authorities to address economic concentration in a balanced manner and to promote economic transformation, the Presidency said on Monday.

“The bill provides greater clarity to firms and investors on prohibited practices and what constitutes abuse of dominance.

“Another expected benefit is improved administrative efficiencies in the work of the competition authorities and facilitative powers to the executive,” the Presidency explained.

Additionally, the amended legislation seeks to combat concentration and economic exclusion as core challenges that contribute to slower and less dynamic growth, lower employment and greater inequalities, as well as socio-political conflict.

The Presidency said this will enable a more effective approach to concentration, with a focus on improving outcomes for small and black-owned business, and strengthen the institutions involved in managing competition policy and law.

“These changes are in the long-term interest of both business and organised labour and benefit small to medium-sized companies through a pro-growth, transformation model that can help lift investment and advance economic inclusion,” the Presidency said.

The signing ceremony will take place this afternoon at the Tuynhuys Chambers in Parliament. Economic Development Minister Ebrahim Patel, who campaigned fiercely for the bill’s codification, will join the ceremony along with a group of stakeholders.