Legal professionals worked amid chanting protesters at airports around the country this weekend, trying to help people detained following President Donald Trump’s executive order restricting the entry into the U.S. of people from seven Muslim-dominated countries. 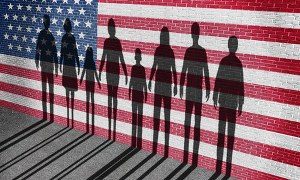 Images posted on social media Saturday and Sunday showed lawyers working on their laptops on the floor of airport terminals and holding up signs offering free legal help to those in need.

Both organized groups like the American Civil Liberties Union and individual lawyers volunteered to help people who were detained or told they could not enter the U.S. as a result of Trump’s executive order.

Atlanta attorney Sarah Collins said she went to the city’s airport at around 1 p.m. Saturday after getting a call from colleagues concerned about the response to the executive order. She said she was there late into the night filing petitions to get people released and went back this afternoon to help make sure people traveling to the U.S. had no problems.

Mirriam Masumi, a defense attorney from the Washington, D.C., area, said that three people came up to her asking for help at Dulles International Airport in a two-hour period on Sunday morning.

“We’re here all day to help whoever needs the help,” Masumi said. The group of attorneys at Dulles said that everyone detained was released but as many as 30 people were in “secondary inspection,” according to Customs and Border Protection. The CBP agents were not allowing the lawyers to speak with any of those people.

Volunteer attorney Stephen Rooke was working to help people detained at JFK, including a Ph.D. student from Stony Brook University.

“This is a true emergency response effort and I am overwhelmed with the quality of the legal support here and all the volunteers stepping in overnight to file emergency orders,” he said.

Some, like Harvard lecturer Ian Samuel, turned to social media to offer their help. Samuel tweeted Saturday that he would provide legal support for government officials who don’t want to enforce the order and said he got dozens of responses from other law professors and others offering their help. He called this “the most active weekend for lawyers in a while” and said it was wonderful to see how organizations like the ACLU had mobilized.

“Every immigration lawyer I know got up Sunday morning and drove to the nearest airport,” Samuel said on Sunday.

Samuel said it’s hard to tell what will happen next because information about how the order should be enforced is unclear, and said the recent court orders were more an emergency measure to help people detained at the time.

On Sunday, 16 attorneys general put out a statement condemning the order as unconstitutional.

“We are confident that the Executive Order will ultimately be struck down by the courts. In the meantime, we are committed to working to ensure that as few people as possible suffer from the chaotic situation that it has created,” said the statement, issued jointly by attorneys general of California, Connecticut, the District of Columbia, Hawaii, Illinois, Iowa, Maine, Maryland, Massachusetts, New Mexico, New York, Oregon, Pennsylvania, Vermont, Virginia and Washington.