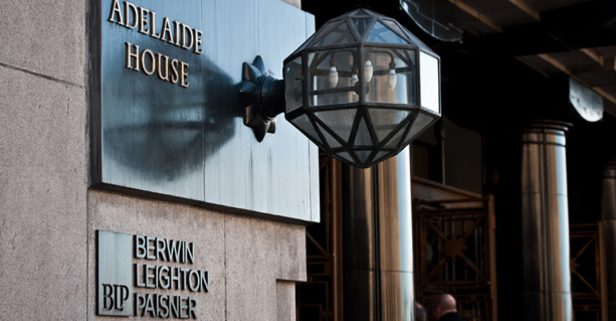 Merger talks between Berwin Leighton Paisner (BLP) and Bryan Cave have been held up as the pair wrangle with tax issues relating to their desire for full financial integration.

Sources at both firms confirmed to Legal Week that a vote on the deal has been pushed back while the pair continue to address the tax complications of a fully integrated UK/US merger.

Some partners had initially expected to vote on the deal, which was announced in October last year, before the end of 2017, with the union potentially going live as early as January. However, BLP partners have said that no vote date has yet been communicated to them by management.

Both firms have previously stated their intention to pursue a fully integrated merger, rather than the looser Swiss verein or company limited by guarantee structures that have been adopted by many other recent transatlantic tie-ups.

One BLP partner said: “I think we are hoping to hear more [about the tax situation] before the end of the month. It should be imminent. People want to get on with it.”

A source at Bryan Cave in the US also said that they expected an update by the end of the month.

He said: “The basic problem that arises on this type of law firm combination is that in the UK, firms have to operate using accrual accounting, where the US work on cash accounting. Converting one to the other has a significant cost element and a US firm will probably want to stay on cash accounting to avoid taking a tax hit. It is a very significant issue, which is why the vast majority of mergers – even when they have one profit pool – tend to have the US still operating on a cash basis.

“You are probably talking between 20% and 25% of turnover being uplifted and that being subject to whatever the US tax rate is on that. That may be negated on accruing further expenses, but you are comfortably looking in the tens of millions.”

A partner at one transatlantic firm added: “Tax regulation often slows these things down because the UK firm becomes liable for US tax if you go for a consolidated approach. It is a one-off hit, but it normally creates a liability of many millions of pounds that you have to find out of the current year, and partners will have to swallow that.”

However, one BLP partner maintained that the two firms still wanted to push ahead with the one-firm structure referenced by Bryan Cave chair Therese Pritchard when the talks were confirmed.

He said: “None of the other [transatlantic mergers] are really fully financially integrated. With all of the other people who have tied up, the plumbing isn’t quite right.”

Big four accountant Deloitte is advising the firms on the tax structure of the proposed merger.

Earlier this month, BLP announced an earlier-than-usual round of partner promotions. Typically, the firm’s new partners are confirmed in April or May, but this year’s promotions were brought forward as a result of the merger talks.

Bryan Cave declined to comment. BLP said estimates into the tens of millions were incorrect and added: “we will not comment any further on what are confidential discussions”.