Tokyo-based law firm Mori Hamada & Matsumoto has agreed to acquire a leading practice in Thailand, aiming to assist Japanese businesses as they expand their presence there and in the region.

Mori Hamada & Matsumoto (Thailand) will purchase Chandler & Thong-ek for an undisclosed sum. Chandler, which is headquartered in Bangkok and employs nearly 50 attorneys, will incorporate “MHM” into its name as early as January.

This will mark the first time that a Japanese legal group acquires a foreign firm of this scale. The Thai firm will serve as the nerve center for MHM’s Asian operations, which will span 60 lawyers. Functions will include providing legal support for the flurry of acquisitions in the region.

Major Japanese law firms have branched out into Thailand in recent years. MHM’s Bangkok office has five attorneys. Seeing demand growing in such neighboring countries as Myanmar, the firm has decided to step up its expansion. 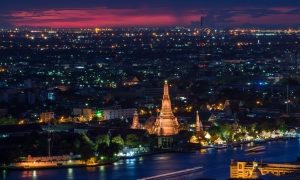 Thailand is the biggest destination in Southeast Asia for Japanese corporations in terms of the number of companies and the amount of direct investment, shows data from the Japan External Trade Organization. More Japanese companies are busy organizing top regional offices, and there are reportedly several cases of decisions being made in Thailand on such important matters as acquisitions and fundraising.

Since 2000, Japanese law firms have been merging domestically into practices stretching over 100 lawyers or more. Nishimura & Asahi, the biggest Japanese megafirm, employs a total of 500-plus attorneys at home and abroad. Anderson Mori & Tomotsune comes in next, with more than 400. MHM, Nagashima Ohno & Tsunematsu and TMI Associates have about 370 lawyers each. MHM would take second place once the Thai acquisition is complete.

The growing scale of Japanese law firms has aided domestic companies in activities abroad. But international acquisitions and the like have often been handled by such non-Japanese behemoths as U.S.-based Baker & McKenzie, which employs thousands of attorneys worldwide.