The value of UK M&A deals dropped by 45 per cent in the first nine months of 2016, new research has found. 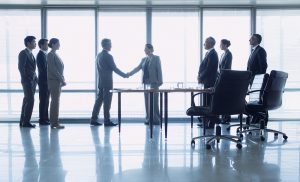 Despite the decline, Freshfields Bruckhaus Deringer, Herbert Smith Freehills and Davis Polk & Wardwell came out on top in terms of deals done.

According to data from Thomson Reuters, the combined value of UK M&A deals between the start of 2016 and now stood at $195.5bn. This compares to $354.1bn at the same point last year.

The drop in value is in spite of ARM Holdings’ takeover by Softbank for £24bn earlier this year, which gifted roles to Freshfields, Slaughter and May, Davis Polk and Morrison & Foerster.

While Freshfields continues to rule the roost in terms of UK M&A (it has worked on 56 transactions worth $77.2bn so far this year) it still lags behind Clifford Chance in the worldwide rankings.

Clifford Chance came in eleventh place globally, having acted on 177 deals worth $164.2bn this year, compared to Freshfields’ 142 transactions valued at $163.7bn.

Clifford Chance’s success in the global rankings can be in part attributed to its work in the European market, trailing just Cravath Swaine & Moore in terms of deals on the Continent. Recent top roles including working on ChemChina’s $43bn of Syngenta and Bayer’s $62bn bid for Monsanto.

The US market has also decline, down 39 per cent on this time last year. Globally deal value has fallen nearly 50 per cent compared to last year, despite the same number of deals being announced at around 30,000 in total.

Wachtell Lipton Rosen & Katz takes the crown at the top of the global M&A rankings so far this year, overtaking Sullivan & Cromwell.

US corporate heavyweight Wachtell advised on 72 deals including Monsanto and Bayer, as well as Johnson Controls’ merger with Tyco. Wachtell’s transactions amounted to a deal value of $336.6bn ahead of Sullivan’s total of $335.7bn.

White & Case and Davis Polk remain in the top five, although Simpson Thacher & Bartlett has dropped slightly making way for Skadden Arps Slate Meagher & Flom. White & Case has advised on a large number of deals – a total of 204 – while Sullivan & Cromwell still leads the tables in terms of transaction value after acting on just 92 transactions since the start of this year at a value of $335.7bn.

Would Brexit mean the end of the Unified Patent Court?
Scroll to top