From 1 December 2020, the UAE government will allow 100% foreign national ownership of businesses. The presidential decree amends Law No. 2 of 2015 on companies and their shareholding.

His Highness Sheikh Mohammed Bin Rashid Al Maktoum, Vice-President and Prime Minister of the UAE and Ruler of Dubai, announced the amendments on 23 November 2020, noting that the UAE now provides a stable, favourable legislative environment for the establishment of businesses. Abolishing the need for companies to have Emirati shareholders will significantly enhance the UAE’s competitiveness on the international stage and attract foreign investment and entrepreneurs.

The amendments to the 2015 Commercial Companies’ Law eliminate key provisions requiring that a company be chaired by an Emirati national and for the board of directors to be majority Emirati. However, local authorities will preserve the power to decide the level of participation by Emiratis in any company. Companies in strategically important sectors, including oil and gas exploration, utilities, and transport, as well as state-owned entities, are exempt from the changes.

The amendments also mean that companies wishing to trade publically can sell up to 70% of their shares instead of the current 30% limit.

The changes follow amendments to the legal code made earlier in November. Unmarried couples are now permitted to live together, protections for women have been increased, and restrictions around alcohol consumption have been relaxed. These adjustments will allow expatriates to feel more confident about living long-term in the UAE.

The Emirates are also expecting Israelis to be among the many foreigners who will open businesses and purchase apartments in the coastal cities of Dubai and Abu Dhabi following the breakthrough US-brokered normalisation deal between the countries.

There is no hiding the fact that the UAE, where the population is 80% expatriates, has been hit hard by the economic effects of the Coronavirus pandemic. The International Monetary Fund (IMF) has estimated that the UAE’s economy will fall by 6.6% in 2020, with vital sectors such as transport and tourism significantly hit by lockdowns. Lower oil prices are also weighing on the country’s finances, with the government expected to post a deficit of 9.9% of GDP, up from a 0.8% shortfall in 2019.

It is essential to put these figures into context – few nations will not see their economy shrink this year. The global economy is expected to contract by at least 3% this year, surpassing the 2008 financial crisis figure. Britain’s GDP decline is expected to be 11.3%, the United States 8.3%, Germany 6.6% and so on and so on. Every country will have to use initiative to ensure their economies recover swiftly – in this respect, the UAE is ahead of the curve.

Traditionally, many foreign-owned entities have been reluctant to establish onshore LLCs in the UAE because of the foreign ownership constraints which saw their ownership capped at 49% outside the free zones.

Lifting restrictions paves the way for the UAE to solidify its position as a hub for organisations that trade across the Middle East. Overhead costs will reduce, and the ease of doing business will dramatically increase.

Most business owners were delighted at the news of the legislative amendments. Ali Rao, Group CEO, Elixir Group, told Gulf Today: “The first of a kind in the GCC region, the 100% ownership of the business in the UAE will boost FDI, investment flows, recoup the economy affected by the COVID-19. The revolutionary step will also greatly encourage entrepreneurs to start new ventures and expand locally, regionally, and globally.”

“We can expect unprecedented dynamism in the business ecosystem instantly, in terms of IPOs, equity-based financing and entry of major venture capitalists from across the globe. Kudos to the UAE leadership for this monumental decision, which I’m sure will be looked back as a landmark some day.”

Our corporate law team can advise and represent you on all matters relating to the 2015 Commercial Companies’ Law amendments. Please contact our office at info@twslegal.ae or call +971 4 448 4284 to talk further. 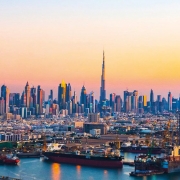 on LinkedIn
Update of the Romanian Trademark Law

Cyprus: Government Assistance During the COVID-19 Pandemic
Scroll to top