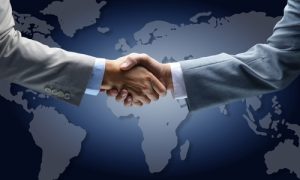 Eversheds Sutherland will be led by chief executive Lee Ranson who takes over as Eversheds chief executive in May, alongside Sutherland’s managing partner Mark Wasserman on a six-person global executive team which will be overseen by a global board of ten people with equal representation from each firm.

Keith Froud, who will take over as managing partner of the UK firm in May, as well as executive partner Ian Gray, will also sit on the global executive team, along with Sutherland partners Victor Haley and Thomas Gick; however Gick will be replaced in April by Cynthia Krus.

On the Eversheds side Ranson (pictured), Froud and chairman Paul Smith will also sit on the global board along with two rotating members from their international board and regional managing partner team. Gick will sit on the board for Sutherland alongside Wasserman, Robert Pile, Eric Tresh and Ben Clark with Krus replacing Gick in April.

Both firms claim shared values and similar cultures were key factors in the tie-up, with Eversheds and Sutherland having a broadly comparable compensation system. Eversheds’ top of equity sits at about £1.2m while Sutherland has some partners sitting at more than $2m.

It is also understood that both firms will have separate bonus pots for partners who exhibit behaviour that helps to progress the combination and smooth the transition to a combined firm through client referrals.

Said Ranson: ‘There are a number of things that are helping to work a common approach. The global executive and the global board are going to bring a consistency in approach. Both firms’ remuneration structures take into account behaviours and cross-selling. Then we have got the bonus points and we are encouraging people within our practice groups, sectors and within our international operations teams to make contact with their opposite numbers, to talk about client opportunities and best practice. We are encouraging that interaction as much as possible.’

Priorities for the combined firm will be building out Eversheds’ insurance and tax practice while investing in finance, particularly in New York, where the firm has 55 lawyers.

Pursuing a US tie-up has been a high priority for Eversheds since 2014 when the partnership heavily backed the strategy through a vote. The firm held discussions with Milwaukee-based Foley & Lardner, which emerged as the preferred firm. However, these talks quickly fell through after a memo from Foley’s chair and chief executive Jay Rothman said no decision was made to pursue such an affiliation.

The deal with Sutherland has also delayed the firm’s Singapore merger with Harry Elias Partnership by three to four months, as Eversheds will need to reapply to Singapore’s Ministry of Law due to the name change resulting from the US combination