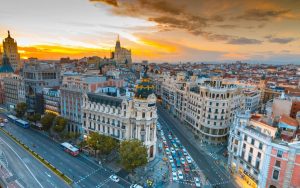 Pinsent Masons has reassigned existing London-based partner Sofía Parra, who was promoted earlier this year, to the Madrid office.

The firm has confirmed that the office will be operational from 1 May.

Pinsent Masons senior partner Richard Foley said: “Our vision is to be recognised as an international market leader in the global sectors in which we operate, and we recognise that we can only do that if we are serious about supporting our clients across key commercial centres.

“We have found a team in Madrid which not only exudes quality but also shares our sector-focused vision. In particular, they share our passion for innovating for and with our clients to redefine the landscape for private practice. We are looking forward to bringing a very different type of law firm to Spain.”

The announcement comes within 12 months of the firm opening an energy-focused office in Dusseldorf and an energy and infrastructure-focused practice in Johannesburg.

Last year, The Lawyer also reported that Pinsent Masons may consider opening an office in Dublin as it launches a review of its operations in Ireland in the wake of Brexit.

The firm already has an office in Belfast, which is headed up by corporate partner Paul McBride. A Dublin office would be Pinsents’ first base in the Republic of Ireland.