Reed Smith is launching its fifteenth US office in Miami

You are here: Home1 / News – Leaders in Law2 / Expansion3 / Reed Smith is launching its fifteenth US office in Miami

Reed Smith is launching its fifteenth US office with a seven-lawyer team joining the firm in Miami. 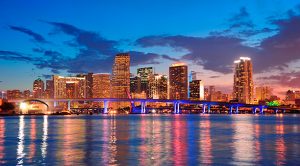 The pair will be joined by fellow partner Cristina Cárdenas, as well as one counsel and three associates. After the departures, Astigarraga Davis will be left with up to 11 fee-earners in Miami.

Seven staff members from Astigarraga Davis are also moving across to Reed Smith.

The Miami base is set to solely focus on arbitration and litigation, and expands Reed Smith’s Latin America business team to 50 lawyers. The group provides legal services to clients in Mexico, Central America and South America.

According to Reed Smith’s managing partner for the Americas Michael Pollack, one third of Reed Smith’s top 250 clients conduct business in Miami, as well as half of its top 50 clients.

DAC Beachcroft further opened an office in Miami in 2015 to complement its existing offices across Latin America.