Business and legal issues today are intertwined as never before. So, doesn’t it make sense to work with a legal network whose services are embedded within the powerful, multi-disciplinary capabilities and broad client footprint of a global professional services leader? With over 2,500 lawyers across more than 85 countries, we have the broadest geographical coverage of any Legal Services network in the world.

US President Donald Trump signed an executive order Wednesday that effectively prohibits US companies from using any telecoms equipment manufactured by China’s Huawei.

The executive order, which has been under consideration for a year, cites the International Emergency Economics Power Act, a law enacted in 1977 that gives the president broad power to control trade in response to a national emergency.

The order does not mention any countries or companies by name. It instead creates a review process that allows the US commerce secretary to review any transactions involving companies that are viewed as posing a security threat to the country, which would include Huawei.

Chinese Foreign Ministry spokesman Geng Shuang said during a daily briefing in Beijing on Wednesday that “for some time, the US has been abusing its national power to tarnish the image of and crack down on specific Chinese companies.” Nevertheless, the United States has been actively pushing other countries not to use Huawei’s equipment in next-generation 5G networks that it calls “untrustworthy.”

The UK Supreme Court ruled Wednesday that citizens of Zambia may sue a mining company in the UK.

The case arises out of a claim by Zambian citizens against Vedanta Resources PLC, which is a company in the UUK that is the parent company of Konkola Copper Mines PLC. The latter company is the owner of the Nchanga Copper Mine in Zambia. The Zambian citizens “allege that their health and farming activities have been damaged by the discharge of toxic matter from the Mine into those waterways from 2005 onwards.”

The decision speaks to “the jurisdiction of the English courts in relation to a group tort claim.” In coming to its decision, the UK Supreme Court found that while Zambia “would plainly have been the proper place for this litigation as a whole,” the issue of access to substantial justice would allow the claim to be brought in England. The UK Supreme Court pointed out two key issues. First, it noted that funding the group claim in Zambia would be difficult because “the claimants are all in extreme poverty, because they could not obtain legal aid and because conditional fee agreements (CFAs) are unlawful in Zambia.” Second, it noted that there was an absence in Zambia of “sufficiently substantial and suitably experienced legal teams” to handle this case, especially because their opponent has more resources.

New Zealand’s Parliament has on Wednesday passed a law banning semiautomatic weapons in response to the Christchurch massacre last month that killed 50 and injured scores of Muslim worshippers.

The legislation has passed the final of three stages and will become law with the ceremonial approval of the Queen of England’s delegate expected Thursday.

119 of 120 Parliament lawmakers supported the bill. Leader of the ACT party, David Seymour, was the sole holdout, citing the process as too hasty.

The lawmakers allowed for two exemptions to the restrictions: commercial pest control business and licensed collectors of guns. New Zealand will conduct a buy back program, allowing gun owners to surrender weapons until September 30.

City firms have begun to release retention rates for the autumn cohort of trainees, with many posting figures in excess of 80% – a significant indicator of health in the sector.

However, magic circle firm Freshfields Bruckhaus Deringer offered contracts to only 29 of 41 trainees, with 27 (66%) accepting a role. It is in marked contrast to last September when the firm retained 95% of its 42 trainees.

As the Gazette went to press, Clifford Chance was the only magic circle firm yet to reveal retention figures.

International firm Pinsent Masons’ figures were not as high, though the firm had many more trainees than some of its rivals. Of 91 trainees, 84 applied and 67 were successful (73%).

Things were far less positive for Weil, Gotshal & Manges. The US-headquartered firm – famous for its high pay rates for newly qualified solicitors – offered contracts to all of its 10 trainees but only five accepted

Lawyers across Pakistan are boycotting court to mourn the loss of some 70 people, many of them lawyers, killed in a bomb attack in Quetta.

In Balochistan – Quetta is the provincial capital – markets and schools have been closed.

The bomber targeted crowds who had gathered outside a hospital to mourn prominent lawyer Bilal Kasi who had been murdered earlier on Monday.

Taliban faction Jamaat-ul-Ahrar says it was behind both the attack and murder. 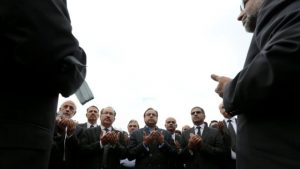 The Supreme Court Bar Association (SCBA) and the Pakistan Bar Council (PBC) said its lawyers would be boycotting court proceedings, and observing a week of mourning.

Many lawyers are expected to take part in rallies across Pakistan on Tuesday.

“We [lawyers] have been targeted because we always raise our voice for people’s rights and for democracy,” SCBA President Ali Zafar told reporters in Lahore.

“Lawyers will not just protest this attack, but also prepare a long-term plan of action.”

Monday’s bombing targeted lawyers and journalists who had crammed into the emergency department of Quetta’s Civil Hospital where the body of Mr Kasi had been brought.

At least 120 people were injured.

Bilal Kasi, who was head of the Balochistan province bar association, had earlier been shot while on his way to the court complex in Quetta.

He had strongly condemned the recent murders – including those of fellow lawyers – in Quetta in recent weeks, and had announced a two-day boycott of court sessions in protest at the killing of a colleague last week.