Hadiputranto Hadinoto & Partners (HHP) has bagged seven awards at the ALB Indonesia Law Awards 2016, including the Indonesia Deal Firm of the Year and the BMW Award for Managing Partner of the Year, which went to Erwandi Hendarta. 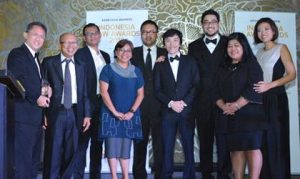 This year’s awards had five new categories. Of these, the Rising Law Firm of the Year award went to Siahaan Irdamis Andarumi & Rekan, while Leoni Silitonga of Roosdiono & Partners and Fahrul Yusuf of SSEK were named as the Woman Lawyer of the Year and Young Lawyer of the Year, respectively.